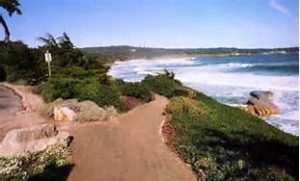 “At my age of 63, there are a lot of things that are no longer likely or possible. I’ll probably never go up Mt. Kilimanjaro or run another marathon. I won’t spend a winter crewing on boats in the Caribbean. Won’t learn to play the piano. Might learn another language, although that’s a long shot. But I’ll tell you one thing that is possible. You can walk across Scotland and put your feet in the sea.” David Brown, excerpted from “Sea to sea: a hillwalking ‘challenge’ across Scotland,” Washington Post Sunday, October 11, 2015

My first experience with recognizing that something was no longer likely or possible “at my age” was during a hike, not across Scotland, but on the Aiea Loop Trail in the Keaiwa Heiau State Park on the island of Oahu. http://www.yelp.com/biz/aiea-loop-trail-aiea.

This was my first time trying this hike, and since I was alone, I did my homework first about safety for solitary hikers. I was encouraged, plus the idea of this being a “loop” meant that I would probably not get lost since, sooner or later, I’d end up back where I started from.

Imagine my surprise when I discovered that it was not, strictly speaking, a “loop.” You begin in one area and end in another. Of course, I didn’t realize this until I was finished—and, by that time, the hike had nearly finished me off.

The first portion was nice (read, “How easy-peasy, so glad I decided to do this”), but the middle had lots of mud and/or water puddles that had to be negotiated (read, “jumped over or waded through”), and the last portion was more enclosed (read, “more isolated and scary than I expected”) by a narrower trail and lower trees.

Plus, there were very few benches or even just a place to pull over to take a break; the trail was not well-marked other than the well-worn main trail; and there were a lot of side trails that you could easily (the only easy thing about this) wander off on, never to be heard from again. Oh, and by the way, it’s not a bad idea to be aware of the sheer drops here and there.

Did I mention that I believed I had done my homework beforehand?

About 90 minutes into the hike, I came across a downed tree that was completely blocking the trail. I had no choice but to climb over it. Which is what brings me to the moment when I realized that something that used to be easy for me had, unexpectedly, become near to impossible: I barely had the strength to hoist myself up and over, and, once over, I became seriously concerned that I wouldn’t have the strength to finish the hike.

Of course, since I’m writing this now, you know that this story had a happy ending. I did manage to finish, especially lifted in spirit when a young mother and her very young son lapped me soon after the tree (I might not have had much strength left, but for heavens sake, I did have my pride!).

At the time, I remember being very discouraged by the knowledge that hiking—at least, this kind of hiking—might no longer be possible for me. And, for a time, I was discouraged about my life in general. After all, baring a miracle, I realized that, in all likelihood, I now had less time in front of me than behind me.

But then I decided I had a choice. I could either close the book on my bucket list OR I could simply change the entries. And I have a lot (although winter crewing on boats in the Caribbean has never been, nor will it ever be, on my bucket list).

So, what’s on your bucket list? Are you constrained by the things that are no longer possible? Or are you energized and motivated by all this IS still possible for you?

Want to know more about transforming limited thoughts and beliefs into limitless possibilities? Check out my Examine–Envision–Emerge Personal Transformation Book Series on Amazon and Smashwords and my YouTube videos.