“The beginning is the most important part of the work.” Plato

Here we are, the beginning of another new year.

Along with football (for some) and the Rose Bowl Parade (definitely for me), for many people, it’s also a time for making resolutions, mostly focused on changing one’s behavior.

It’s believed that the Babylonians were the first to make New Year’s resolutions. They promised the gods to pay their debts and return any objects they had borrowed. If the Babylonians kept to their word, the gods would bestow favor on them for the coming year. If they didn’t – well, let’s not go there.

In ancient Rome, after Julius Caesar established January 1 as the beginning of the new year, January had special significance for the Romans. Believing that Janus, the two-faced god for which January is named, looked backwards into the previous year and forward into the future, the Romans offered sacrifices to Janus and promised good conduct for the coming year.

I like the idea of keeping to one’s word. I’ll pass on making sacrifices.

Words have power. Whether we write or speak them, they have an impact on us. They express feelings and share knowledge. They can change our mood completely and ignite a spark within us. It is through words that we create our lives and our world, that we choose what to pay attention to and make real.

I’m a Therapeutic Storyteller, so I believe in the transformative power of words.

So for 2023, I think I’ll follow the Babylonians’ lead. I have no debts, and if I have borrowed something, I don’t recall what it was or who it belongs to (if you know, please let me know; I don’t need the wrath of some deity sacrificing me for a screwdriver.) Instead, I’ve chosen to focus on these words to guide my behavior this year.

Steven Spielberg said, “All of us every single year, we’re a different person. I don’t think we’re the same person all our lives.”

I hope Steven is right because I’d like to be a different person this year. 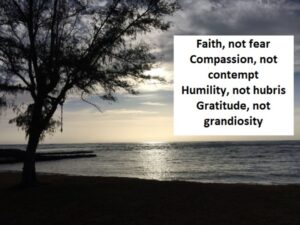